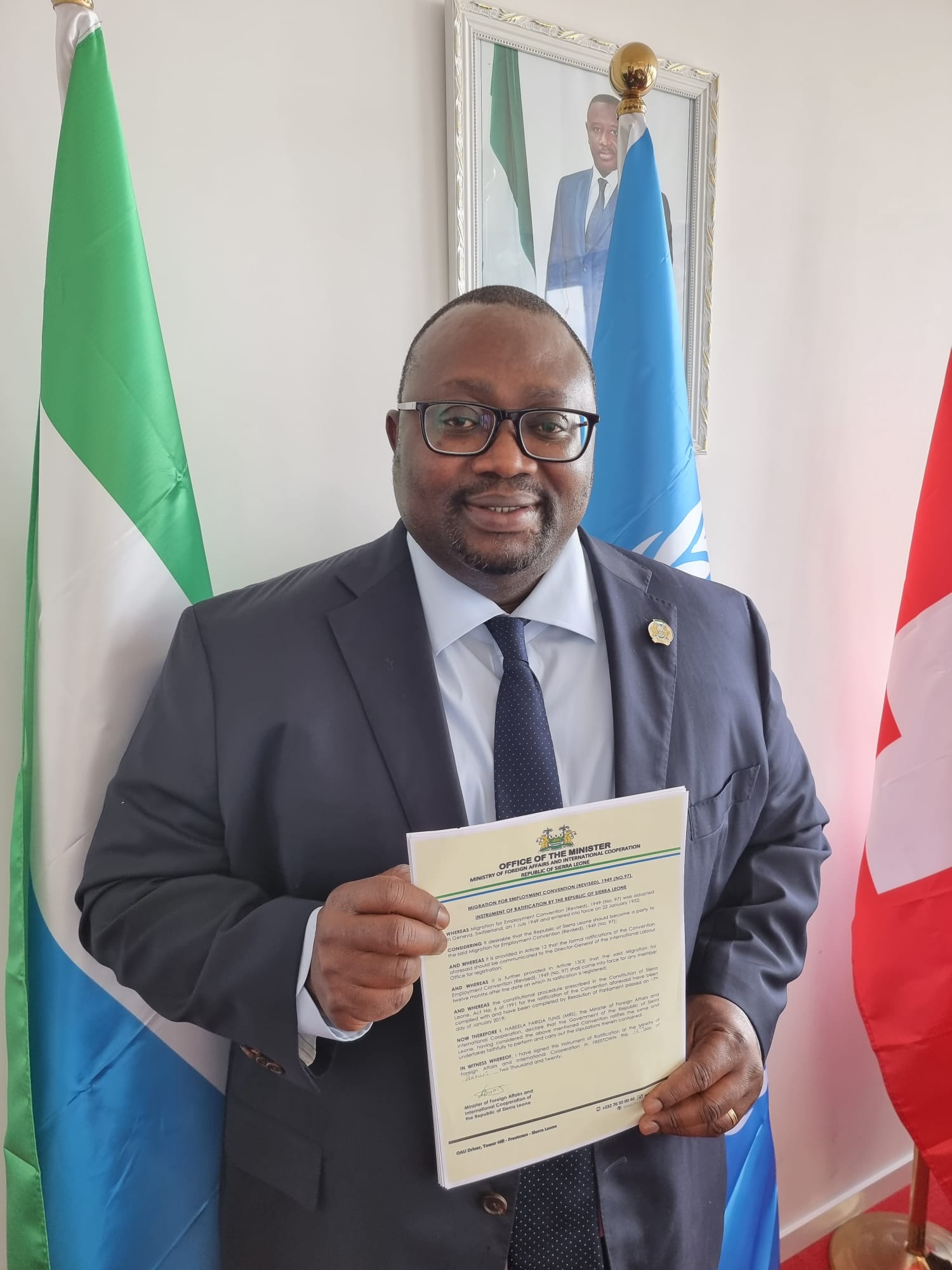 Ambassador Gberie thanked the Director-General for ILO’s support to Sierra Leone over the years in promoting labour rights, including protection from discrimination, and forced labour, as well as strengthening dialogue on work-related issues in Sierra Leone.

His Excellency Lansana Gberie said the ratification and deposit of the 9 Instruments of Ratification were a demonstration of President`s Bio commitment to improving the lives of our people. It also, he said, fulfils promises made in Sierra Leone’s Medium-Term National Development Plan of 2019-2023.

Ambassador Gberie recalled that on 4 December 2018, the Government of Sierra Leone laid before Parliament five (5) of the nine (9) ILO Conventions and Protocol. On 4 January 2019, these instruments were unanimously ratified by the whole House of Parliament.

Six months later, on 4 July 2019, the Government of His Excellency President Bio laid before Parliament the remaining four (4) of the nine ILO Conventions and Protocol. These too were unanimously ratified by the Sierra Leone Parliament on 16 July 2019.

“In our National Development Plan 2019-2023, we made the observation that Sierra Leone lacks adequate and relevant labour policy and legislation, and that there is no comprehensive regulation for labour market operations in the country. Some of our existing labour laws were outdated, like the Employers and Employed Ordinance and the Trade Union Ordinance, which regulates the labour market in Sierra Leone, and dating back to 1960, one year before our country gained independence from Britain”, Ambassador Gberie noted.

His Excellency assured ILO of the government’s commitment to improving the labour standards of the workforce in Sierra Leone as well as creating a private sector business-friendly environment that makes the law clear, consistent with international standards, and easy to comply with for domestic and foreign investors.

In his remarks, the ILO Director-General, Mr Guy Ryder, thanked the Government of Sierra Leone for the very hard work in ratifying such a high number of ratifications.

“Let me say Ambassador that it is not every day that I receive the ratification by a member state of no less than nine instruments. Eight Conventions and One Protocol. Indeed, it is unique in my experience, and I know that this has never happened before from any country from the continent of Africa. These ratifications come at a very good moment in terms of the relationship between Sierra Leona and the ILO”, he noted.

Mr Guy Ryder said substantively that the instruments which Sierra Leone ratified cover areas of obvious importance and priority in social policy in our country.

He said that the ILO is in the process of drafting a Second Decent Work Country Programme as well in mobilising some resources to do important project work in Sierra Leone. Mr. Ryder revealed that the ILO recently signed an 8,000,000 Euro agreement with European Union to undertake work in respect of agricultural value chains, feeder road maintenance, and improve business environment. “So, the legal formalities that are proceeding today are reflected in very practical way in the ground cooperation between my organisation in your country which I think shows that this is not something which is removed from lived realities. It is very much a question of improving working conditions and labour markets in Sierra Leone”, he concluded

The ILO Director-General signed copies of the original certificates of deposit, of which one original copy of each will be transmitted to the Ambassador of Sierra Leone after the ceremony.