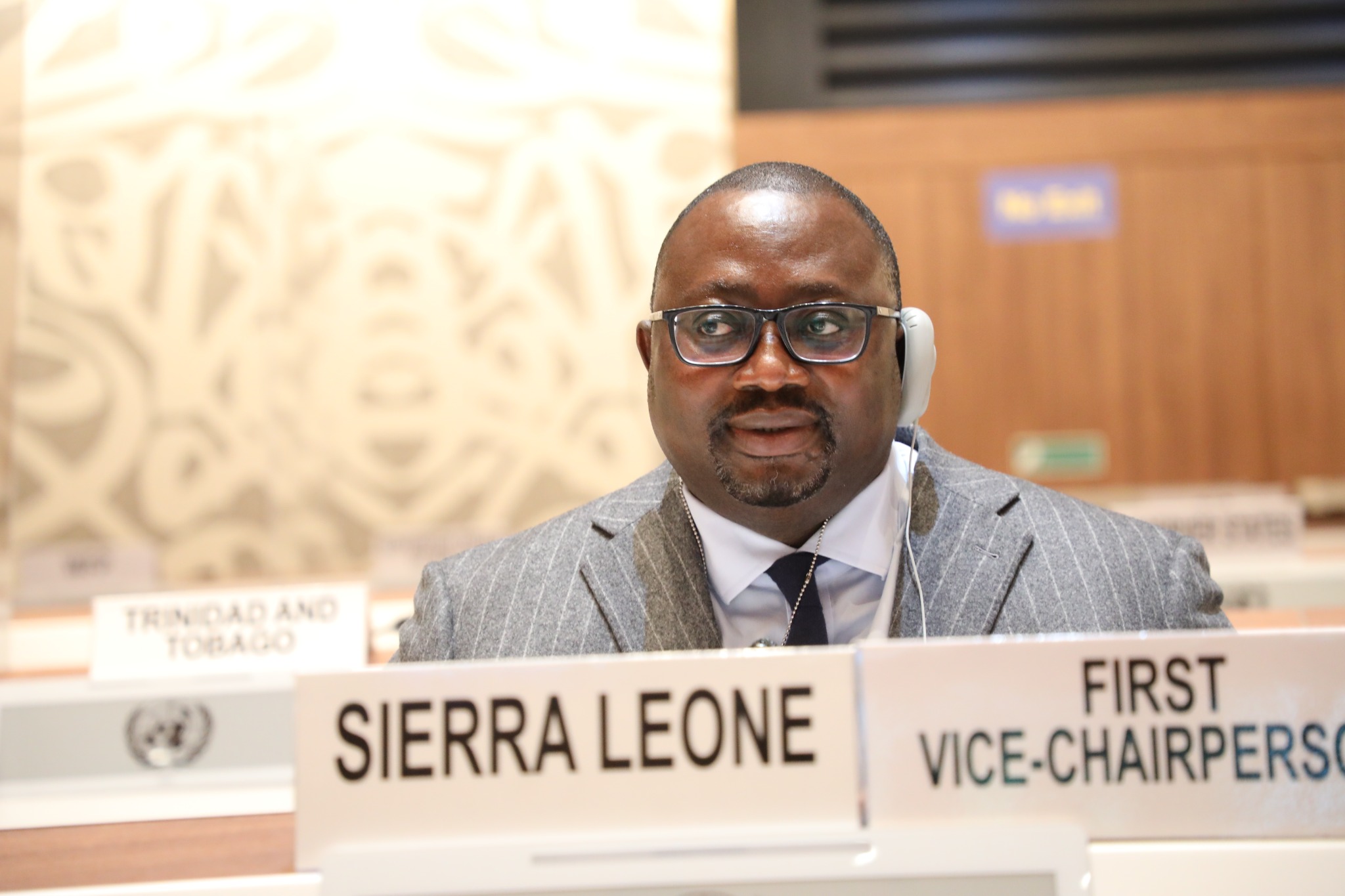 The 112th Session of Council was held from 29 November to 01 December 2021 in a hybrid format, with in-person and online attendance. Ambassador Gberie led the Sierra Leone delegation to the Council, the highest authority of the International Organisation for Migration (IOM). It meets in regular session once a year and in special sessions at the request of one-third of its members, the Director General or the Chairman of the Council in urgent circumstances.

At the beginning of each regular session, the Council elects, from among the representatives, a Chairperson, a First Vice-Chairperson, a Second Vice-Chairperson and a Rapporteur. The officers are elected for a one-year term and hold office. They are eligible for re-election.

Sierra Leone is recognized again in the international community. Recently, Ambassador Gberie’s Presidency of the Arm Trade Treaty ended with major achievements. Praises for Sierra Leone dominated the closing day of the 112th Session of the IOM Council.

In his statement, His Excellency, Ambassador Gberie, congratulated members of the Bureau on their election to lead the 112th Session of the IOM Council and thanked the outgoing Chairperson H.E. Mr. Evan P. GARCIA, Ambassador and Permanent Representative of the Philippines, “for his leadership of the 111th IOM Council as well as for his brilliant and outstanding stewardship during the past very challenging year.” The IOM recently underwent an internal reform process of its senior leadership structure with the selection of two Deputy Director Generals, Ms. Ugochi Daniels and Ms. Amy Pope on their appointment as DDG in charge of operations and DDG in charge of management and reform, respectively. Ambassador described the two as “very highly accomplished and capable women.”

Ambassador Gberie thanked Mr. António Vitorino, the Director-Genera of IOM, for “his vision and steady leadership, and to his team for their dedication and commitment.” IOM, he said, “has helped millions of migrants and displaced people by supporting countries create the conditions for safe, orderly, and regular migration for seven decades.”

He added, ‘’Sierra Leone would like to commend the IOM on its response to the Covid 19 pandemic, ensuring that migrants are not left behind in COVID-19 relief plans. We would also like to extend our gratitude to the Director-General and his staff for working tirelessly to ensure that the organization remains effective, operational and fit for purpose during these challenging times’’, Ambassador Gberie said.

The First Vice Chairperson said the IOM’s Continental Strategy for Africa 2020-2024 and its effective implementation thus far has been a mark of true leadership and vision. The renewed and strengthened cooperation with the African Union and A.U. Member States on migration issues and the effort to foster inclusive and sustainable development in Africa will be critical, especially in the post-COVID 19 pandemic recovery.

Ambassador Gberie underscored the numerous gains of IOM over the years, but expressed dismay over migrants subjected to discrimination, xenophobia, abuse and exploitation. He called for Global cooperation on migration now more than ever.

He said his government believes that migration and development should be addressed comprehensively. Adding that Agenda 2030 cannot be achieved without due consideration of migrants and mobility. As a cross-cutting issue, migration is relevant to all the 17 SDGs.

‘’I am happy to recall that in Sierra Leone, the National UN Network on Migration was launched on 1 June 2021, and the government has been working with the network to integrate migration into the Common Country Analysis (CCA) and the United Nations Sustainable Development Cooperation Framework (UNSDCF), in alignment with and as part of the implementation of these two frameworks’’ Ambassador Gberie concluded.