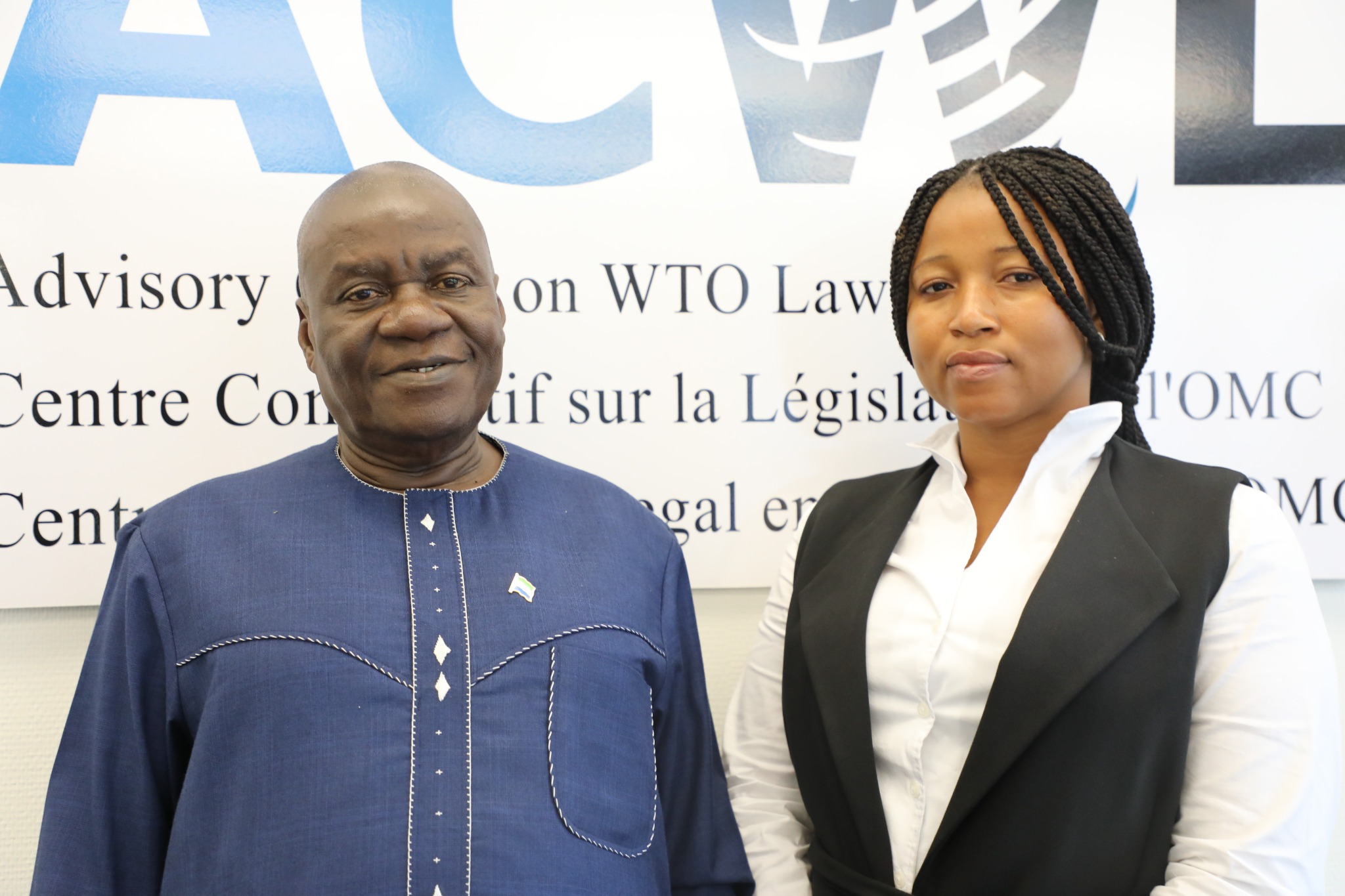 Geneva, Friday 8 October 2021- Sierra Leone’s Attorney-General and Minister of Justice, Anthony Y. Brewah Esq., has met with Kadijatu Zainab Bangura, who is representing Sierra Leone on a secondment training program for Trade Lawyers 2021-2022 at the Advisory Centre on WTO Law.

The AG's aim was to motivate her in promoting and maintaining the values of Sierra Leone in Switzerland within the next one year.

In the recent past, His Excellency, Dr Julius Maada Bio, and some senior government officials have been engaging investors and development partners to support Human Capital development through formal or informal systems in the country, so that they will be useful for themselves and the world.

It is against this background that one of Sierra Leone’s industrious Lady, Kadijatu Zainab Bangura was accepted for secondment at the Advisory Centre on WTO Law being the first Sierra Leonean since independence after a vigorous interview.

Kadijatu Zainab Bangura (Ms.) Served the Law Officer's Department at the Ministry of Justice and Office of the Attorney-General of Sierra Leone as State Counsel from 2012-2019 at its International Law Division and Prosecution Division.

She joined the Anti-Corruption Commission in January 2020 and later proceeded to Ireland for a master’s degree program in Global Legal Studies during the 2020-21 Academic year.

Ms. Bangura is currently serving the Advisory Centre on WTO Law as a Junior Counsel in its annual secondment training program for Trade Lawyers 2021-2022.

The Attorney-General and Minister of Justice, Lawyer Anthony Y. Brewah, on behalf of the President, Dr Julius Maada Bio, thanked ACWL for providing training and capacity building for one of the government official. Adding that, the secondment for Kadijatu, will strengthen her capacity to support the justice sector of high-quality services in the coming years.

The Attorney-General appealed to ACWL leadership to continue the required legal support to Sierra Leone to catch up with the numerous trade disputes for the Member States.

The Executive Director, Niall Meagher, Advisory Centre on WTO Law, gave a background to the formation of the secondment program, which Sierra Leone and other countries in West Africa and the Middle East were benefiting from.

He said the Pandemic has affected the institution especially to get people from Francophone countries and other part of the world to be part of the programme.

The Executive Director assured the Attorney-General and Minister of Justice of his organization`s support to Sierra Leone as developing country.

The secondment programme allows lawyers from member countries particularly LDCs and SIDs to be trained in WTO law, and Sierra Leone’s Kadijatu Zainab Bangura is currently a beneficiary of the programme in Geneva. Switzerland.

The ACWL is an Intergovernmental Organisation that provides advice and training on all matters relating to WTO law and support in WTO dispute settlement proceedings to developing countries and LDCS.