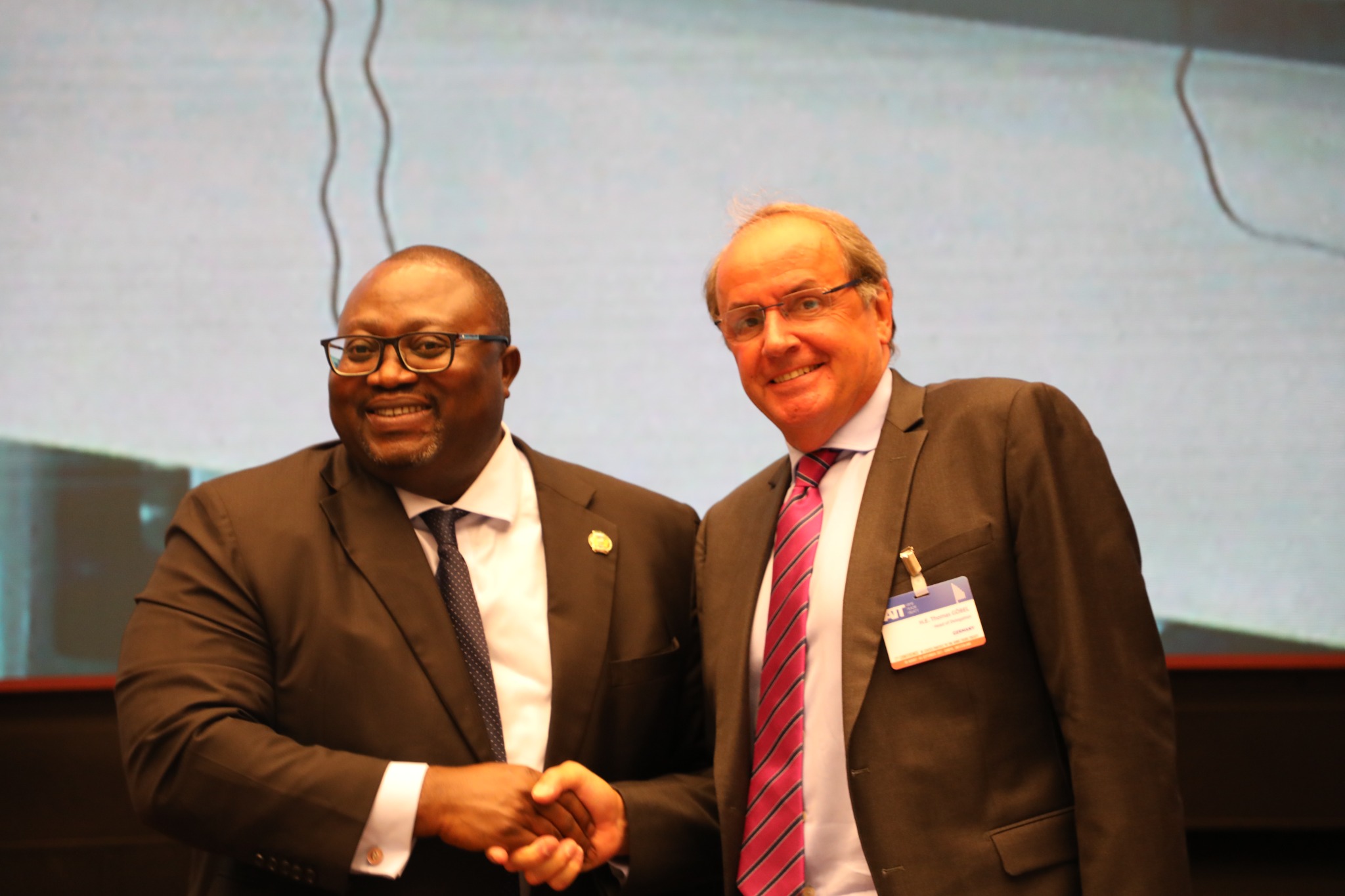 Geneva, Switzerland, Monday 6 September 2021- A week of intensive meetings of the Seventh Conference of States Parties to the Arms Trade Treaty (ATT), chaired by Sierra Leone’s Ambassador to Switzerland and Permanent Representative to the United Nations and other International Organizations in Geneva, Switzerland, Ambassador Lansana Gberie, as President, ended with all key initiatives and decisions by Sierra Leone unanimously adopted by delegates. The Conference, organized in a hybrid format – with in-person and online attendance – was attended by 103 States, seven International and Regional Organizations, and 33 Representatives of Civil Society and the Arms Industry. Delegates from European Union, International Committee of the Red Cross, Inter-Parliamentary Union, United Nations Institute for Disarmament Research, United Nations Office for Disarmament Affairs, United Nations Office on Drugs and Crime and the Wassenaar Arrangement all made statements of support for the work of the ATT and its President. The Gambia and Kenya, not yet signatory States but whose Heads of State received a letter from His Excellency President Dr. Julius Maada Bio of Sierra Leone urging them to join the treaty, sent delegations to the Conference in accordance with Rule 3 of the Rules of Procedure and are currently engaged with the procedure to become full States Parties. 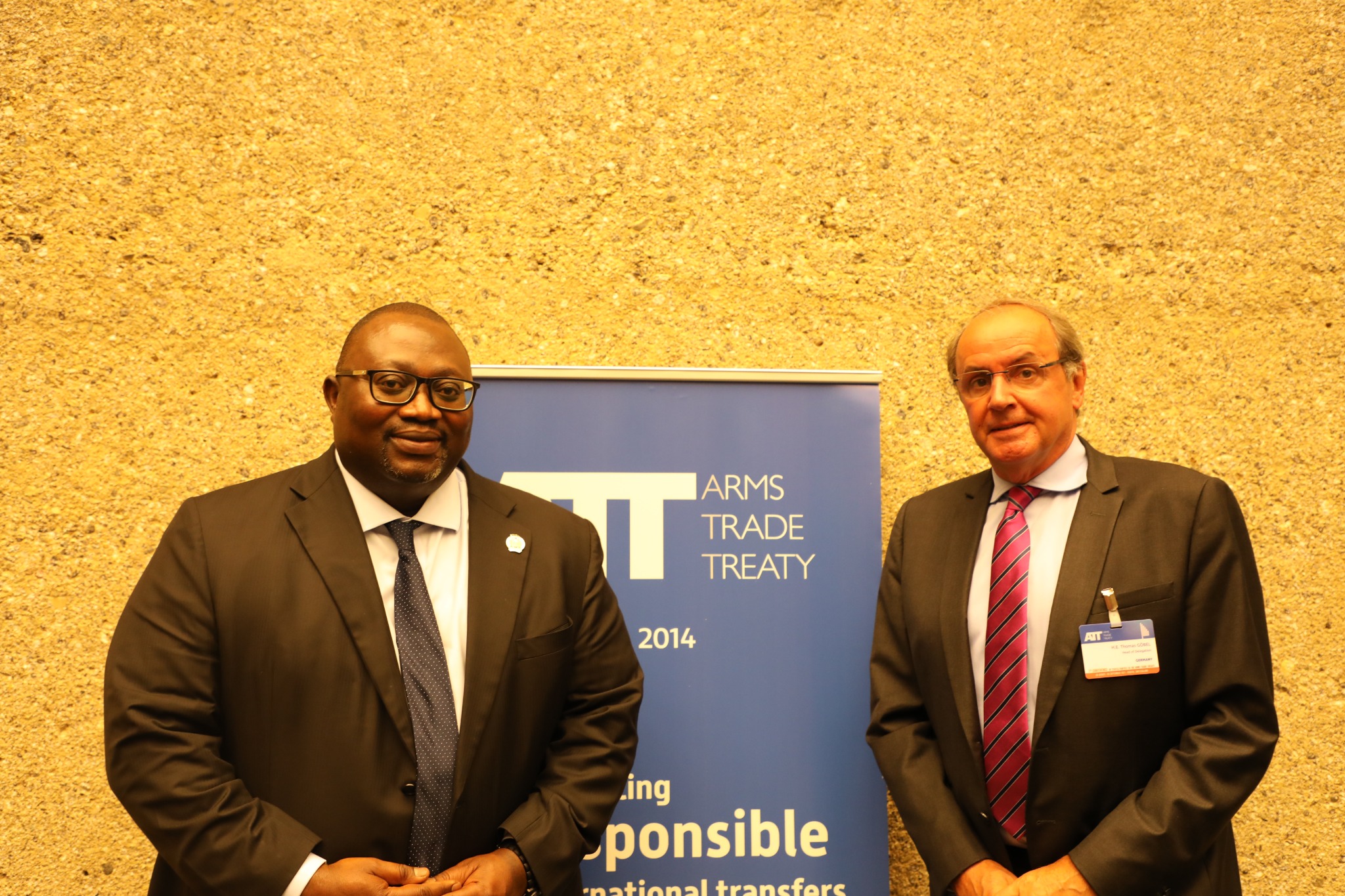 The priority theme of conference – based on the President’s Working Paper entitled “Small Arms and Light Weapons and Stockpile Management” – was unanimously endorsed. Among others, the Conference decided that all “stakeholders should map and better utilize existing guidance and tools developed under relevant international and regional instruments on preventing the illicit trade in SALW and strengthening stockpile management and security in order to prevent diversion as a way to strengthen ATT implementation.” It urged all States Parties to share “information on effective and innovative stockpile management programs through updates to their ATT initial reports,” as well as to provide information on their “national practices relating to ‘mitigating measures’” with respect to gender-based violence including as “related to stockpile security: what these can be and how they are implemented 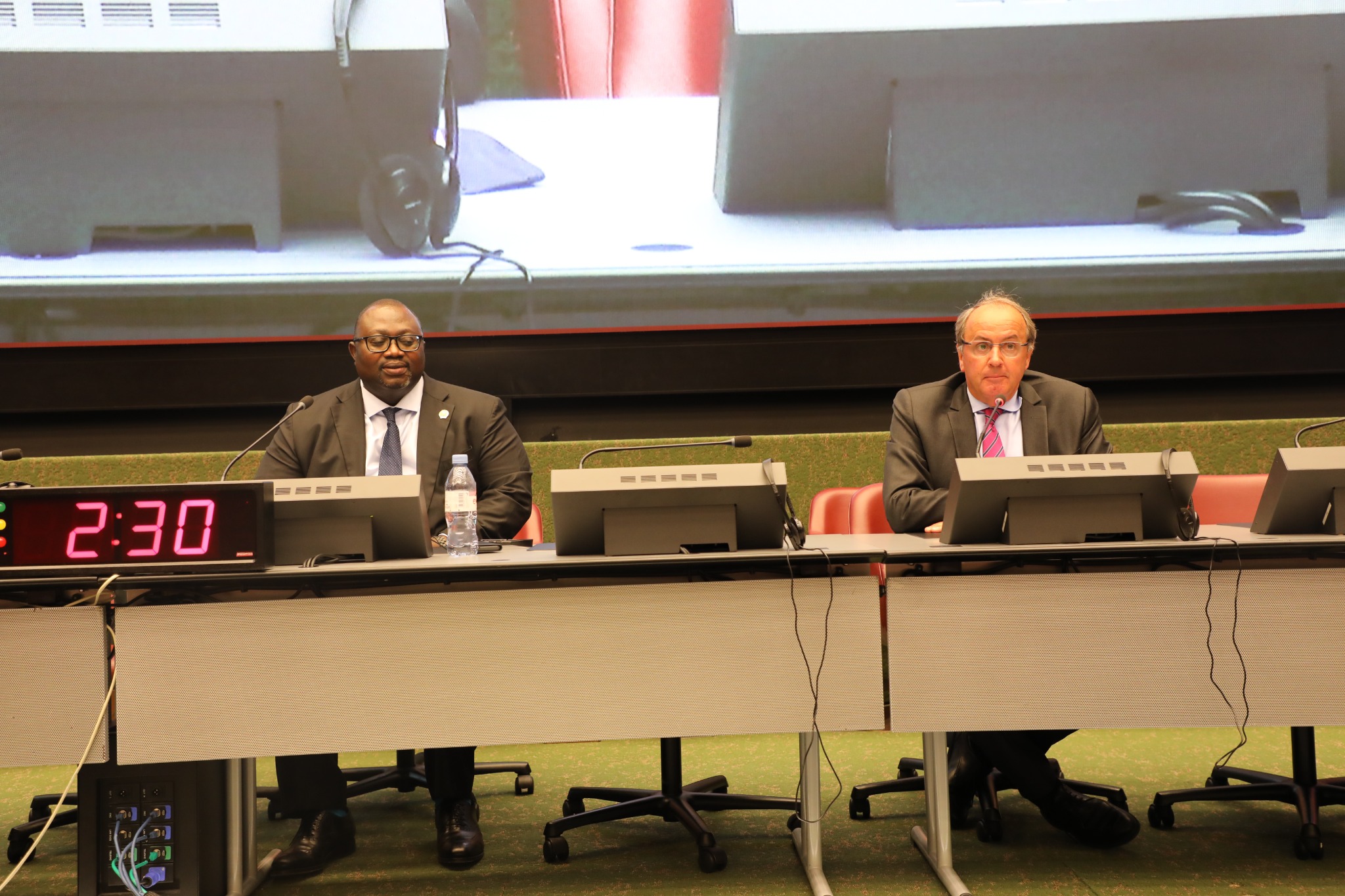 The Conference was officially opened by Professor David John Francis, Minister of Foreign Affairs and International Cooperation of Republic of Sierra Leone, on behalf of His Excellency President Dr. Julius Maada Bio. 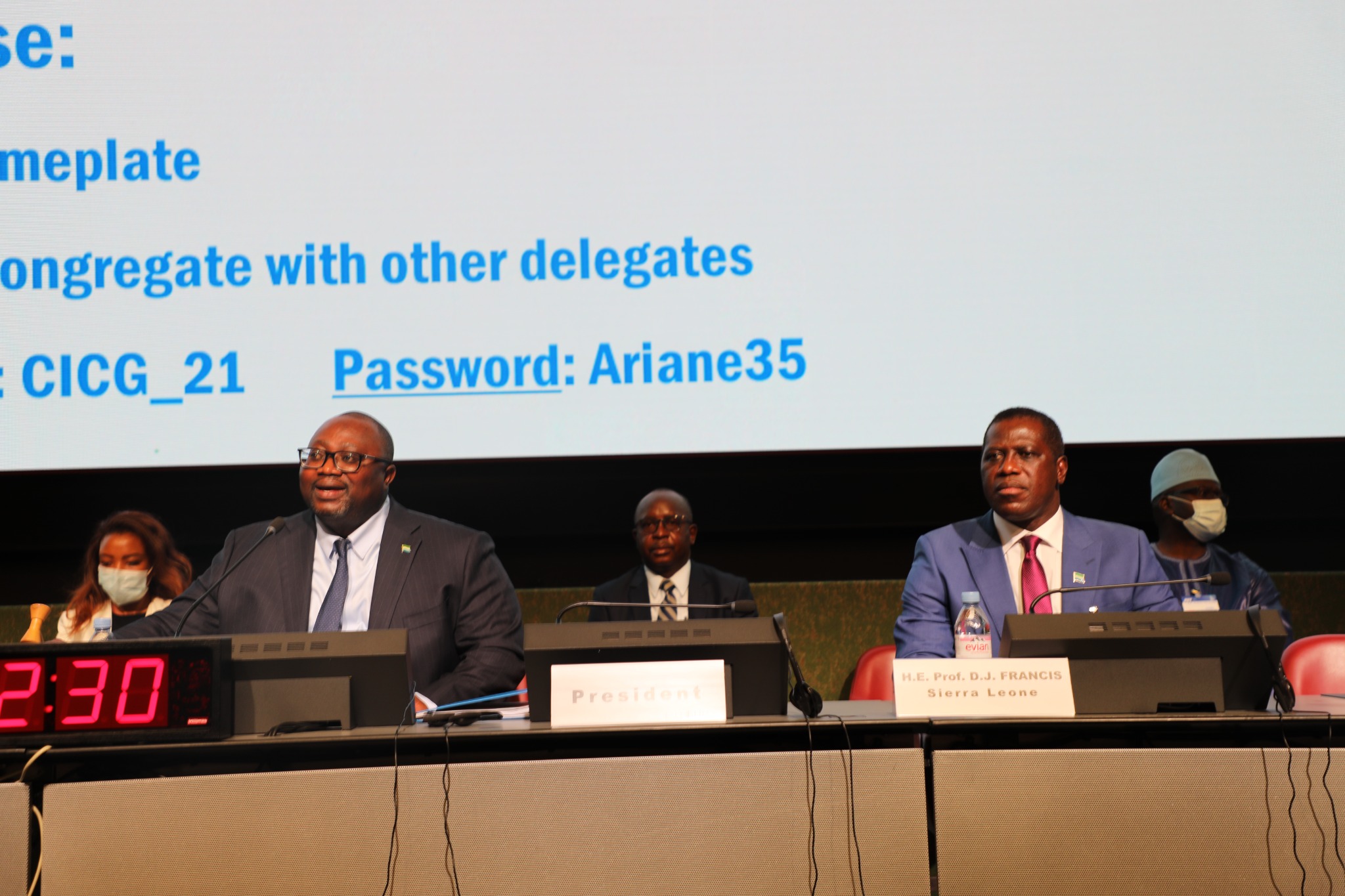 H.E. Mr. Sheik Omar FAYE, Minister of Defense, Republic of the Gambia, delivered a well-received statement committing to the Gambia to joining the ATT.

“I am honoured to address this seventh Conference of States Parties to the Arms Trade Treaty on behalf of my President, His Excellency President Adama Barrow. Early this year, President Barrow received a letter from his brother, His Excellency President Dr. Julius Maada Bio of Sierra Leone, inviting the Gambia to join the Arms Trade Treaty. This invitation reminded us immediately that our country was the only one in West Africa that has not yet signed or ratified the treaty. So let me thank you, Mr President, for your efforts to expand the membership of the ATT in these challenging times.” He added: “Mr President, ladies, and gentlemen, let me conclude by conveying to you, with great pleasure, His Excellency, President Barrow’s decision to accede to the ATT and become a state party. The Gambia looks forward to formalising the accession and subsequent ratification process and becoming a trustful and cooperative member of the ATT community”, he said.lenary statements were also made by Mr. Gilles CARBONNIER, Vice President, International Committee of the Red Cross and Mr. Eugine Nyuydine NGALIM, Executive Director, Cameroon Youth and Students Forum for Peace, Control Arms. Video messages from H.E. Mme. Marie-Gabrielle INEICHEN-FLEISCH, State Secretary for Economic Affairs, the Swiss Confederation and H.E. Ms. Izumi NAKAMITSU, Under-Secretary-General and UN High Representative for Disarmament Affairs were shown at the opening as well. 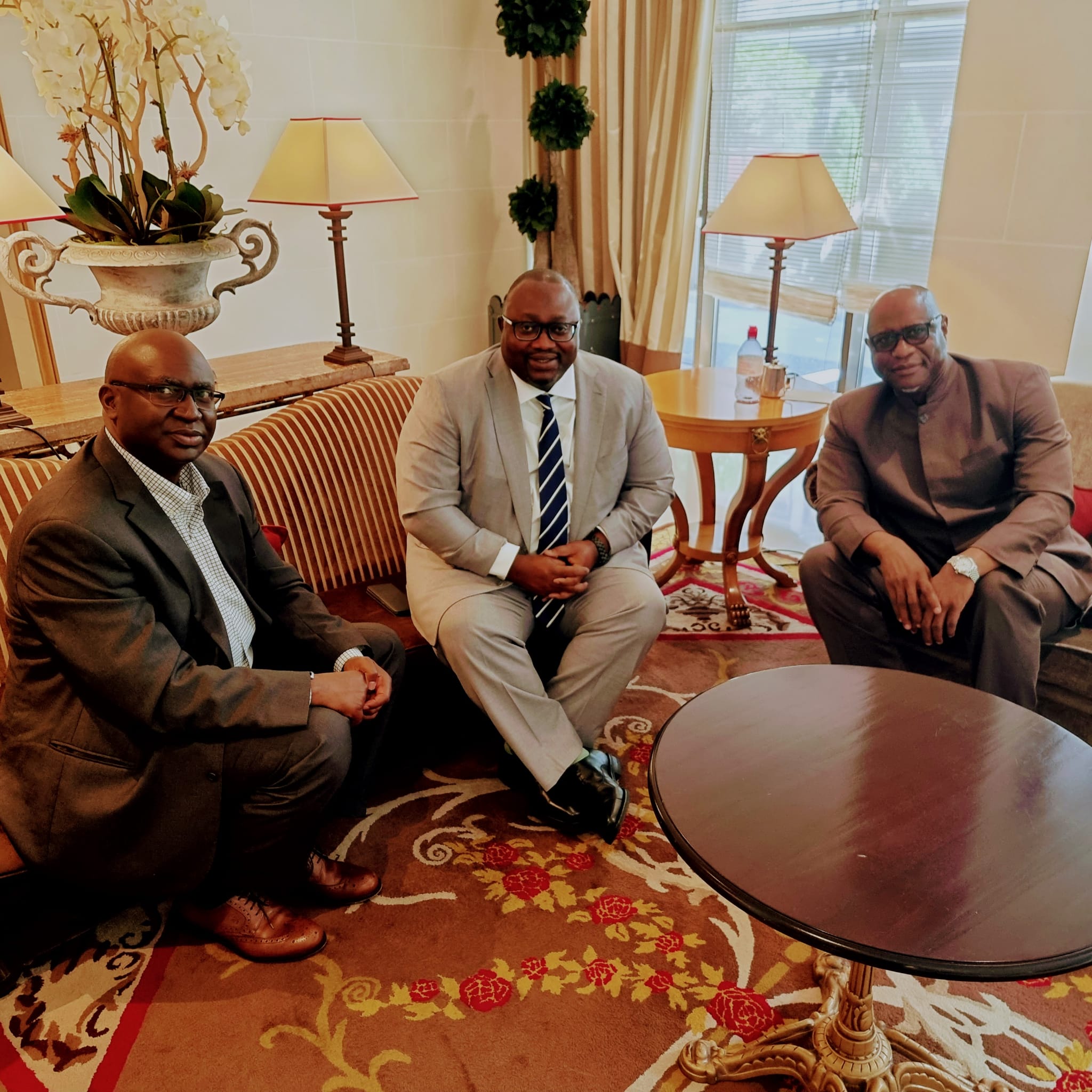 Praises for Ambassador Gberie dominated the closing day of the Conference and after. From Ambassador Julia Imene-Chanduru, Namibia’s Permanent Representative to Geneva, in a Note: “As the Coordinator of Disarmament Matters in the Africa Group, I wish to note that your tireless efforts…throughout the Seventh Cycle of the CSP, under the important theme of Small Arms and Light Weapons, and Stockpile Management, have made great strides in advancing the goals of the ATT. As an African we are immensely proud of you.” From the Ambassador Aiden Liddle, UK’s Permanent Representative to the Disarmament Conference, also in a Note: “Very many congratulations to you and your team for the excellent outcome and smooth running of the ATT Conference of States Parties this week. It was wonderful to have your Minister here in person to open proceedings and teeing up the announcement from The Gambia was a special touch. And I thought the discussion on your Presidency paper was very important and substantive. The elements which might have proved controversial in the end were handled very smoothly and discreetly. So, after the difficulties of last year – and I don’t pretend that the circumstances were ideal this year either – we can safely say the ATT is back on track, and you hand it over to Germany in sound working order.”

Ambassador Gberie assured the President of the Eighth Conference of States Parties to the Arms Trade Treaty of his unflinching support, particularly on treaty universalization. 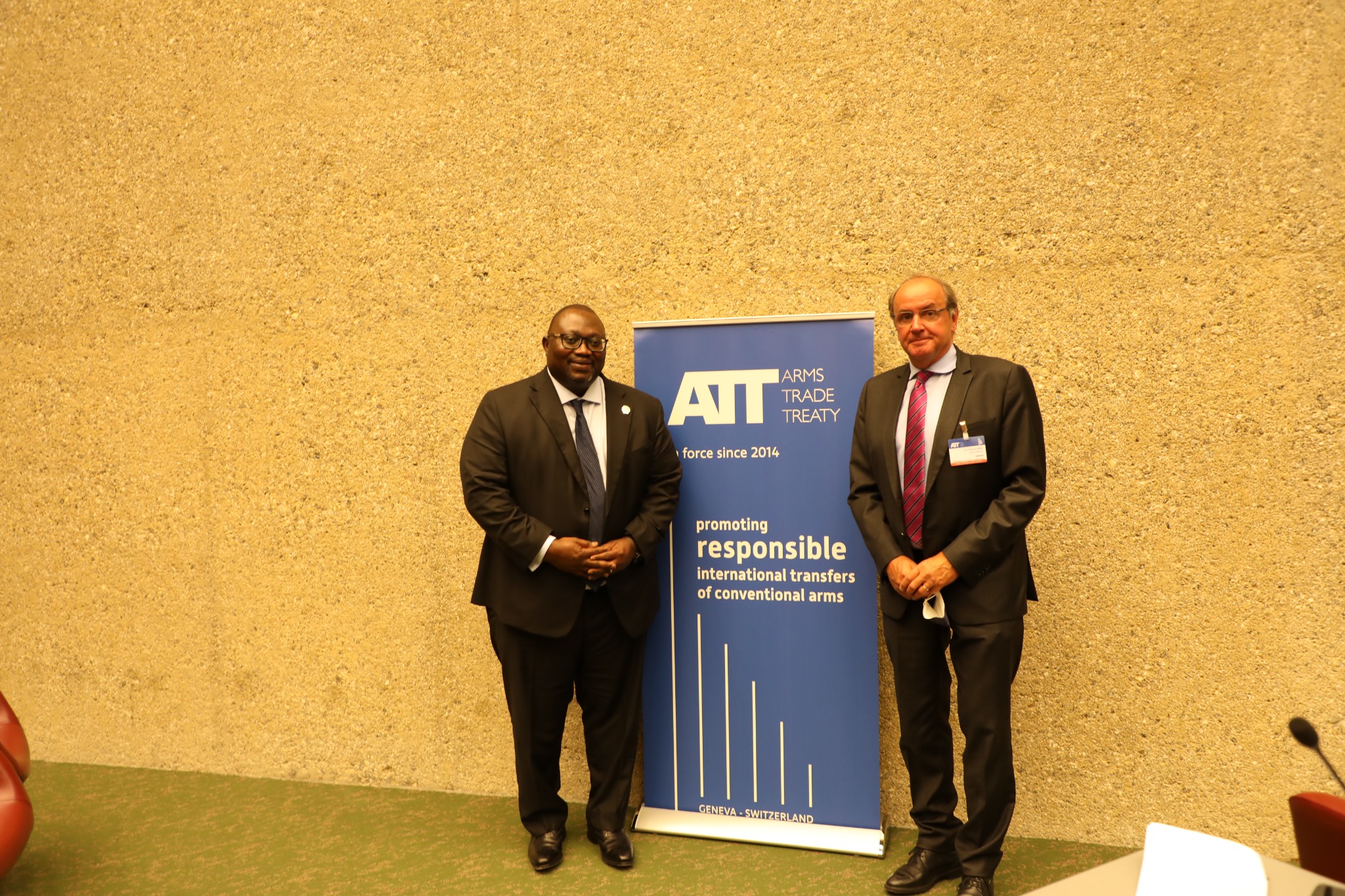 The ATT is the key instrument for regulating the global arms trade, covering the production, movement, and stockpiling of weapons, as well as human rights issues that are salient in armed conflict.