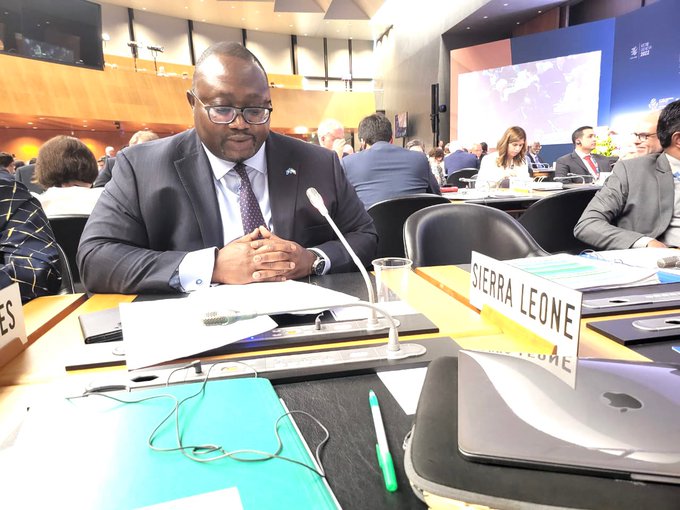 Geneva, Switzerland, Friday 17 June 2022 - As chairman of the World Trade Organisation's TRIPS Council, Sierra Leone’s Ambassador Dr Lansana Gberie, together with the membership of the WTO, has achieved what was hitherto widely considered within diplomatic and international trade circles as one of the most difficult, if not impossible goal of the 12th WTO Ministerial Conference (MC12) that took place from 12 to 16 June in Geneva.

Years, months, and weeks of member states' negotiations culminated in this week’s intensive meetings in Geneva.

At the WTO’s Council for Trade-Related Aspects of Intellectual Property Rights (TRIPS Council), Sierra Leone’s Ambassador to Switzerland and Permanent Representative to the United Nations and other International Organisations in Geneva, Switzerland, Dr. Lansana Gberie, skilfully steered the negotiations and deliberations to successfully secure consensus on the draft outcome document of the TRIPS Council.

This achievement came about following several informal negotiations during which the proposal put forward by the Quad (i.e., the European Union, India, South Africa, and the United States) on how WTO Member States should handle the intellectual property (IP) aspects of COVID-19 emerged as the leading draft and received the support of Member States. The proposal contained several initiatives led by WTO Director-General, Dr Ngozi Okonjo-Iweala.

The TRIPS Council’s 2021 drafted a proposal calls for a waiver of certain provisions of the TRIPS Agreement regarding the ‘’prevention, containment, or treatment’’ of COVID-19 and provides for the continued exemption of Least Developed Countries (LDCs) from TRIPS Agreement obligations.

Ambassador Dr Lansana Gberie’s dynamic leadership propelled efforts to finalise work on the draft text of the proposal on IP response to the pandemic. It was submitted in time Trade Ministers’ review and was unanimously adopted by the WTO’s Member States at MC12.

Other areas of success at the recently concluded MC12 were the unprecedented decisions on fisheries subsidies, WTO response to emergencies, waiver of certain requirements concerning compulsory licensing for COVID-19 vaccines, diversification of the production of COVID-19 vaccines and access for all, food safety and agriculture, and WTO reform.

The Conference, organised in a hybrid format – with in-person and online attendance – was attended by 164 WTO Member States, from across the world to review the functioning of the multilateral trading system.

It is important to note that Sierra Leone’s recent pre-eminence and leadership in many international fora is borne out of the direction, leadership, and vision of His Excellency President Dr Julius Maada Bio to position the country and its diplomats to contribute to global governance and international rulemaking. This strategy is executed by the President’s deliberate and thoughtful choice of appropriately qualified, competent, and experienced diplomats, like His Excellency Dr. Lansana Gberie who was appointed in 2018 as Head of Mission in Switzerland.

Under Ambassador Gberie’s astute leadership, Sierra Leone has received several commendations from the international community in Switzerland as the Ambassador is frequently seen as willing, able and competent to take leadership positions like his current chairmanship of the WTO’s TRIPS Council; his election as First Vice Chairperson of the Governing Bureau of the International Organisation of Migration; his election in 2020/2021 as President of the 7th Conference of States Parties to the Arms Trade Treaty; etc.

The appointment of Ambassador Dr. Gberie to chair the WTO’s TRIPS Council demonstrates acknowledgment of Dr’ Gberie’s competence and bestows trust and confidence in Sierra Leone’s ability to lead and coordinate the work of international organisations.