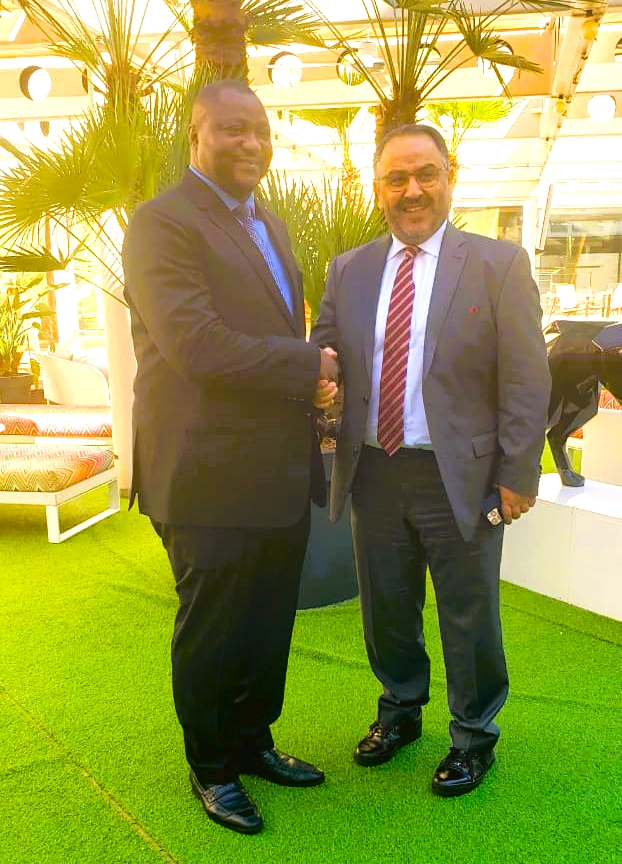 Geneva, Switzerland, 14 June 2022- On the Margins of WTO’s 12th Ministerial Conference in Geneva, the Minister of Trade and Industry of the Republic of Sierra Leone, Honourable Dr Edward Hinga Sandy, today held a productive bilateral meeting with his counterpart Minister of Commerce and Industry of Kuwait, His Excellency Mr Fahad Mutlaq Al-Shuraian. The pair discussed trade and investment opportunities in both countries.

The Minister of Trade and Industry maintained that the objective of Sierra Leone’s trade reform programme is to position Sierra Leone as the hub for trade and investment in the Mano River Basin.

In his brief statement, the Trade Minister highlights the range of potential investment opportunities in Sierra Leone, citing the country's successful transition from a war-ravaged nation to a leading example in Africa for peaceful elections, democratic governance, a rule of law nation and have had five successful transitions of governments through the ballotbox. This is a nation that where businesses can thrive based on its favourable personal tax system and concessionary and competive cooperation tax regime.

The Minister of Trade and Industry intimated his counterpart on possible Private sector areas for investment ranging from manufacturing, to agribusiness, to technology and the mining sectors in Sierra Leone.

In his response, the Minister of Commerce and Industry of Kuwait, Mr Fahad Mutlaq Al-Shuraian, thanked his colleague for the meeting and extended his felicitations on behalf of his Head of State, the Emir of Kuwait, His Highness Nawaf Al-Ahmad Al-Jaber Al-Al-Sabah to His Excellency, President Julius Maada Bio, the government and people of Sierra Leone.

The Kuwaiti Minister said Sierra Leone and Kuwait should each serve as a staging post for each other in their respective regions to enable their entering into new markets and the build trade relations and infrastructure necessary for export and trade promotion.

The Minister of Commerce assured of his government’s collaboration and cooperation with Sierra Leone. Adding that his Ministry will continue to encourage the private sector in Kuwait to seize the opportunity to trade and invest in Sierra Leone.

During this meeting, the two Ministers discussed several trade and investment opportunities including the need for a Bilateral Agreement between the two countries that will focus on specific sectors for growth, such as Agriculture, Manufactory, Tourism, Infrastructure, Transport and Aviation, and Energy among others.

At the end of the meeting, the Ministers registered mutual commitments to improve their two countries' trade relations and discussed staging a planned Investment Conference in Kuwait to bring together investors in both countries.