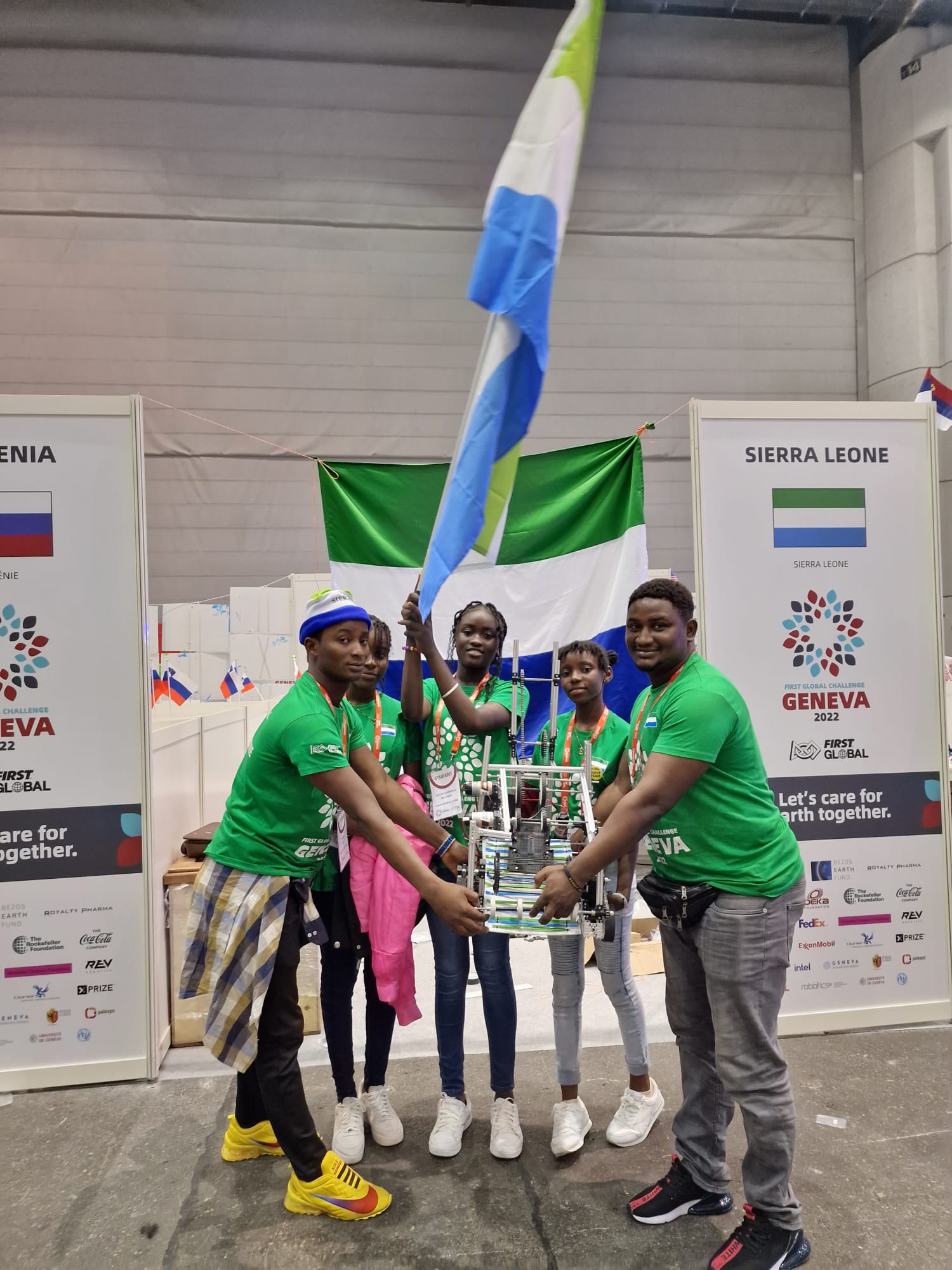 Geneva, Switzerland, Friday 14 2022 Five talented young teenagers with numerous potentials from different schools have represented Sierra Leone at the global stage were among 180 + other countries are participating in a Robotics Competition by using a standard kit of parts to design and assemble a robot to complete tasks from the 13th - 16th October 2022.

The team from Sierra Leone is made up of five (5) students, one (1) mentor and two (2) Volunteers.

The robotics challenge is organized by FIRST Global and it aims to ignite a passion for Science, Technology, Engineering, and Mathematics (STEM) among the more than two billion youths across the world. The FIRST Global is a US-based 501(c)(3) not-for-profit public charity that provides the framework for an “Olympics”-style robotics challenge.
Sierra Leone’s efforts at achieving SDG4 and President Bio’s leadership on the Human Capital Development - increased domestic revenue for education, provided teaching and learning materials, improved education policies and governance, and encouraged more girls including pregnant girls, and learners with disabilities in school have all proven dividend among Sierra Leonean citizens and the World at large.

In October 2018, President Julius Maada Bio established Sierra Leone’s first Directorate of Science, Technology and Innovation (DSTI), to support government’s delivery on development and boost innovation and entrepreneurship. Since the establishment of the Directorate of Science, Technology and Innovation, more women and girls into digital solutions, and work with researchers, entrepreneurs, youth and innovators to embed digital literacy and critical thinking.

The government through the Directorate of Science, Technology and Innovation, National Commission for Children and other relevant institutions will continue to invest in local talent in order to build a community of developers in Sierra Leone that will create new digital technologies.

At the Opening ceremony of the Global Robotics Competition 2022, the team was received and accompanied by Sierra Leone’s Ambassador to Switzerland and Permanent Representative to the United Nations and other International Organizations in Geneva, Switzerland, Ambassador Lansana Gberie, and the Head of Chancery and Minister Counsellor, Mr Edward Kawa.

The National Commission for Children (NCC) is a statutory body established by government to monitor and coordinate the implementation of the Convention on the Rights of the Child and the African Charter on the Rights and Welfare of the Child lead the delegation was headed by Mr Mamud Keita.

“We believe in the children’s limitless potential and we provide enabling environments and access to programs that encourage them to collaborate with one another, think critically and creatively to develop solutions to challenges they’ve identified in their communities as well as help them build the confidence necessary to communicate their ideas”, he concluded.